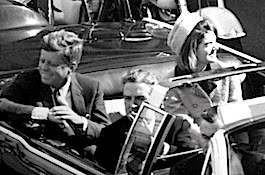 When I was growing up, we had one radio in the house--in the kitchen. My parents chose not to have a television, so that was our "media," along with a record player of some sort. We would gather in the kitchen every night to hear Lowell Thomas give the 15-minute evening news sometime around our dinner hour. But when we were in bed sick, we had the privilege of the radio being moved to our bedside. Then I would listen to those 15 minute radio stories--soap operas of that day I suppose. So it was that 50 years ago I was in bed with one-sided mumps, listening to the radio as I ate cream of mushroom soup for lunch. The program was interrupted by the news that our president had been shot. I rushed downstairs to tell my parents. They didn't believe me at first. The radio was soon moved back downstairs so all could follow the news more closely.

My father rented a small television set for a few days so we could follow this earth shattering news. How could such a thing happen? I was glued to the TV and the images are still so clear in my mind … Jackie Kennedy's blood spattered suit and her classic pillbox hat (I only knew it in black and white but later learned it was pink), the open convertible, close-ups of Lee Harvey Oswald, Little John standing at salute, the horse drawn wagon carrying the casket,  the casket being carried up the Capital steps to lay in state.

Then came Sunday morning when many were in church. I was still home sick, watching the news, and therefore I was an eye witness to the killing of Lee H. Oswald by Jack Ruby. Live on TV. What an incredible weekend. I'm thankful our father enabled the visual memory for us as it made such an impression. A moment in history never to be forgotten by any. A time when those of us who were old enough to remember, know exactly where we were when we heard the news that day.

obviously not my photo, just off the internet
Posted by podso at 11:07 AM