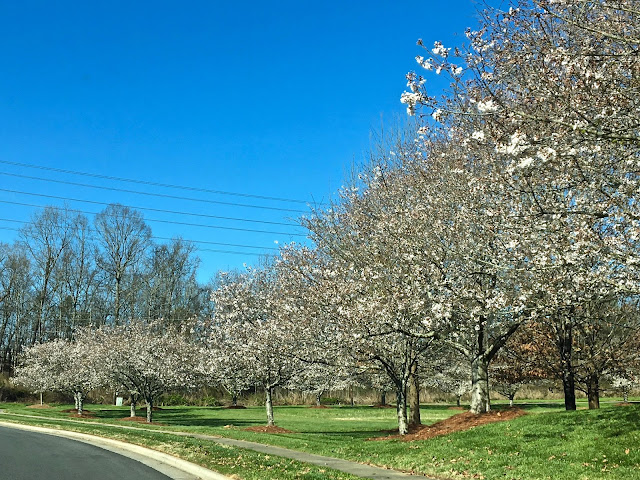 I enjoy this view in any season, on my way home from the gym. I've been waiting
for the blossoms to come, and they finally have, but ever so slowly. Spring is in full bloom here
because of our warm February. But it has progressed slowly because it's cold again.
Looking outside at the beauty all around one would never guess it was below freezing this morning.
It seems so, so cold--maybe because we're ready for it to be warmer, or maybe it's all the wind.
Brrr. 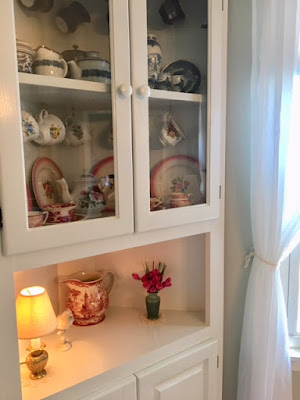 Inside it's another story.
When my DIL told me there is a newish business where
someone comes in and "styles" your shelves, book cases and china cupboards (etc),
I took a look at mine . . . a little busy, tired-looking and yes, overcrowded. 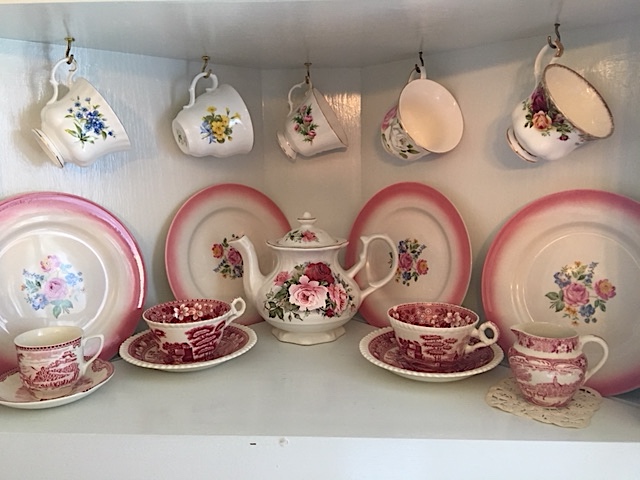 It sounded like a fun job.
So I decided to do a little restyling of my own china cabinet. 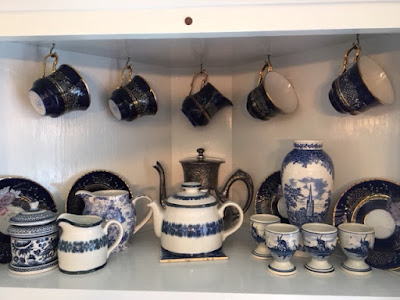 I'm not sure I changed the world with my work,
but it sure was fun and gave me a mental boost. 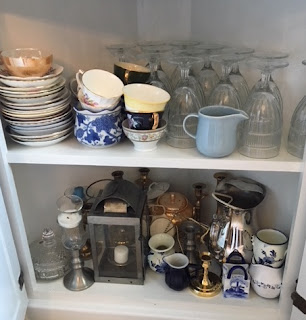 (Here's where some of it went; and some will leave the house.) 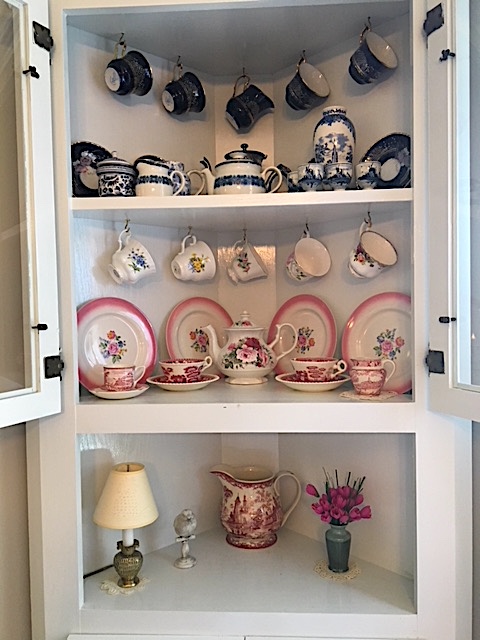 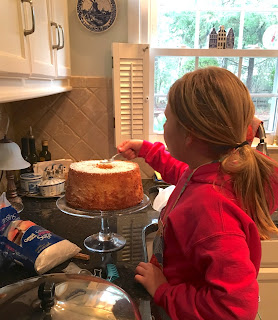 Catsup bottles seem to go with angel food cakes, at least in my mind. I can still see the kitchen of my childhood and a tall catsup* glass bottle on the counter with the angel food cake in the pan resting upside down.

This week was DIL's birthday and since our oldest granddaughter (who I used to call Little One) loves to cook, we decided to cook a meal together to celebrate her mom's birthday. I let her plan the menu according to what she considered her mom's favorites. It was a full one (and I even cut out a few items): spaghetti with meatballs, cheese pizza, salad, garlic bread and angel food cake with strawberries and whip cream for dessert.

Little B's teacher let me take her out of school an hour early so we had plenty of time. We donned aprons and began first with the cake (the spaghetti sauce was simmering in the crock pot.) I could not remember the last time I made an angel food cake, if I ever did. I was happy to find, after basically crawling into that dark, dungeon-like space under the corner counter, my mother's angel food cake pan--far better than the cheaper one I had owned and given away when hers arrived in my kitchen. We used a mix. Somehow separating 12 eggs sounded like an ordeal, so we let Betty C. do it for us.

Little B. did great. She insisted we follow directions to a T, including removing the extra oven rack and placing the other one at rock bottom of the oven, very nearly touching the heat element. We measured the pan so we knew for sure we had four inches for the cake to rise.

Brown and cracking on the top, the cake was baked and we instantly (per directions) turned it over and placed it on --- what? to cool. No glass catsup bottle in my frig. We finally found a bottle of oil that
was narrow enough to fit the hole in the pan. 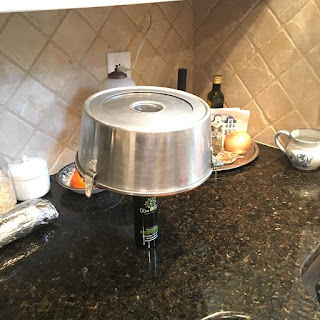 It worked so smoothly (it pays to follow directions!) that I feel like I
would make another one without hesitation.
Little B. did a fine job decorating the cake according to her creative druthers.
She made place cards for us and created a game involving saying good things about her mom.
Table was set, water in glasses, candles lit, and all was in readiness when the rest of the family arrived. 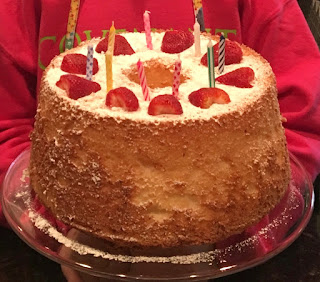 * So I looked up catsup and ketchup and found they indeed
mean the same, but in the 50s, when I was a child, catsup
was more commonly used, so I chose that spelling for today.

beauty in the gray 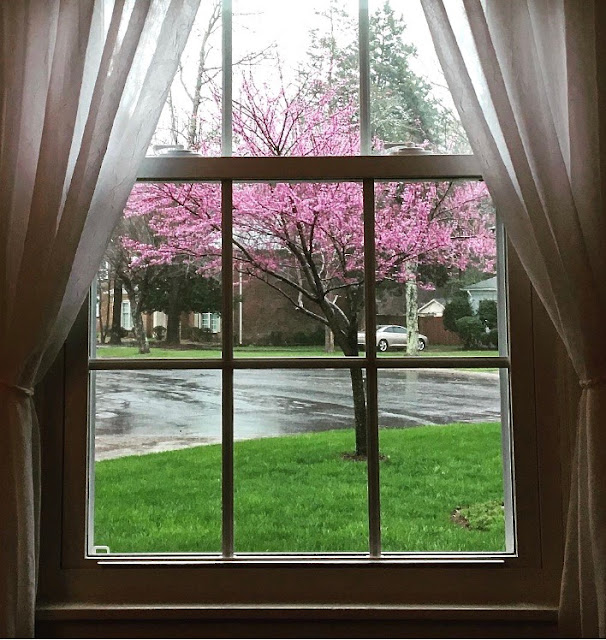 An old redbud across the street has flourished for many a spring.
Its wispy splendor catches my breath.
We have two little redbuds in our own yard now;
they bloom one after the other.
I think their beauty shines most brilliantly on a gray or rainy day.

The Gardener and I were to embark on a long journey last week that would
take us to the bottom of the continent of Africa.
Among other things, the Gardener was looking forward to showing
me the most beautiful city in the world, according to him.

The plans were long made and I was starting to pack when
the searing pain of inflammation attacked his low back and hip.
It got worse and worse to the point we questioned the wisdom
of long flights and airport layovers. We prayed for clear
guidance and it came. We canceled the trip. God granted us
the grace to accept the deep disappointment, and filled us with peace
and release from needing to know the answer to "why."

Instead we received a series of small serendipities that would
not have been possible had we been away.
We looked at them as gifts.
Beauty can come out of difficulty.
Blossoms can shine on gray days.