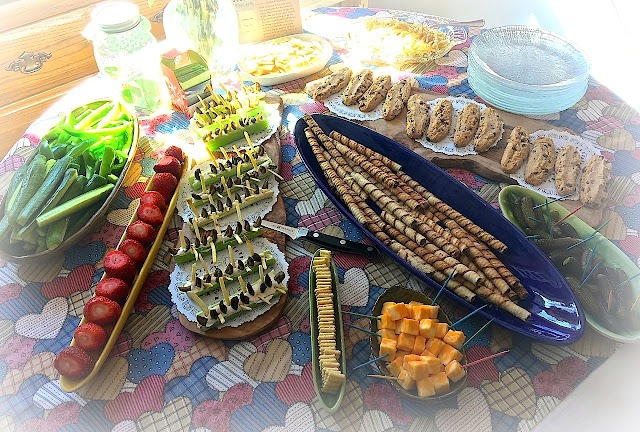 I don't usually enjoy a book about sports,
so reading Boys in the Boat, by Daniel J. Brown,
was definitely a different experience for me.
And, it has become one of my favorite books. 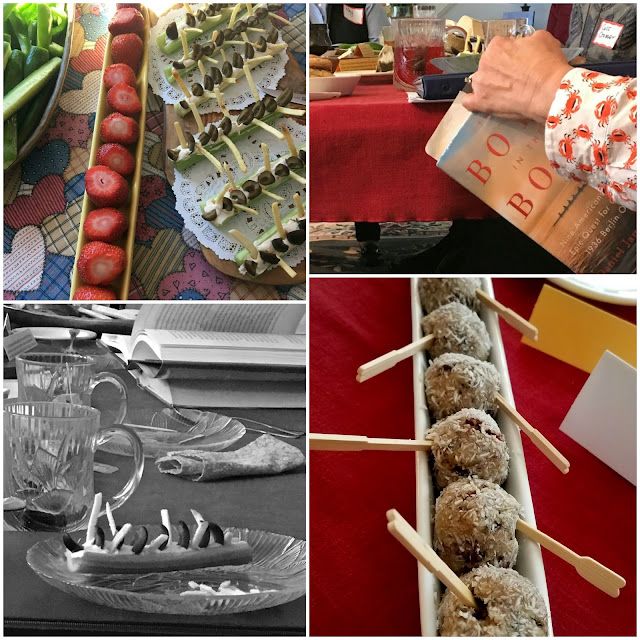 More on the book in a moment. Food seems important at our book club as much as
we try to simplify things. This time Lydia Grace, our hostess, provided just
simple snacks. Well--maybe not so simple. One thing led to another
as she creatively came up with boat-type serving pieces and snacks.
See all the narrow slips (boats), oars and nine crewmen? 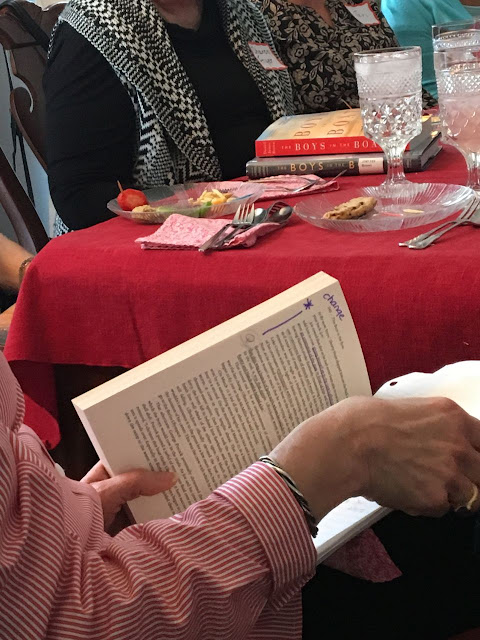 The book was about the 1936 University of Washington crew that won the
gold medal at the Berlin Olympic games. See? That doesn't sound to me like
a book I'd like. It was even long, and I had to get three different
copies out of the library to get it all read before book club.
But it was well worth it. Mr. Brown is an excellent writer.
I kept reading snippets to the Gardener and he followed the story along with me.
It took us through the depression, regattas near our college, the dust bowl,
Hitler's propaganda schemes, extreme weather, and inside the lives
of young college men who were just regular guys.

The teamwork was what was the most fascinating and such a wonder
to take in. It was a riveting story and gave me a lot to think about.

"And he came to understand how those almost mystical bonds of trust and affection,
if nurtured correctly, might lift a crew above the ordinary sphere, transport it to a place
where nine boys somehow became one thing--a thing that could not be quite defined,
a thing that was so much in tune with the water and the earth and the sky above that,
as they rowed, effort was replaced by ecstasy." 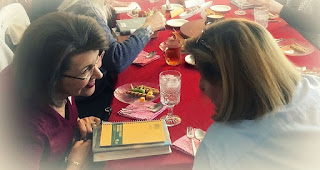 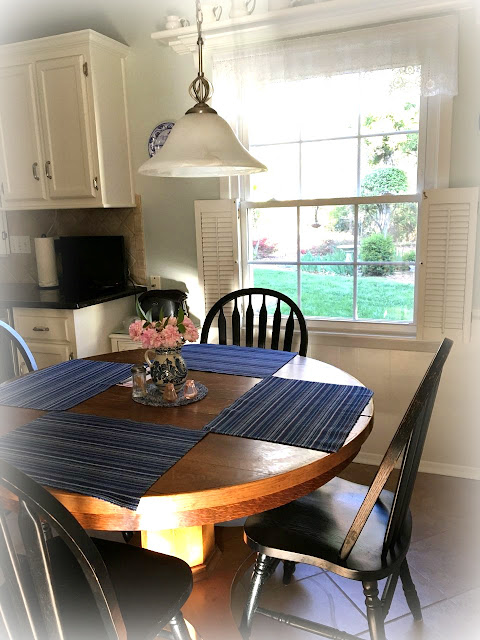 "I would maintain that thanks are the highest form of thought;
and that gratitude is happiness doubled by wonder."
~G.K. Chesterton, 1874-1936
A thought for the weekend.

Joining Five on Friday to say thank you to Amy.
Four square, one round, makes five blue mats on the table. 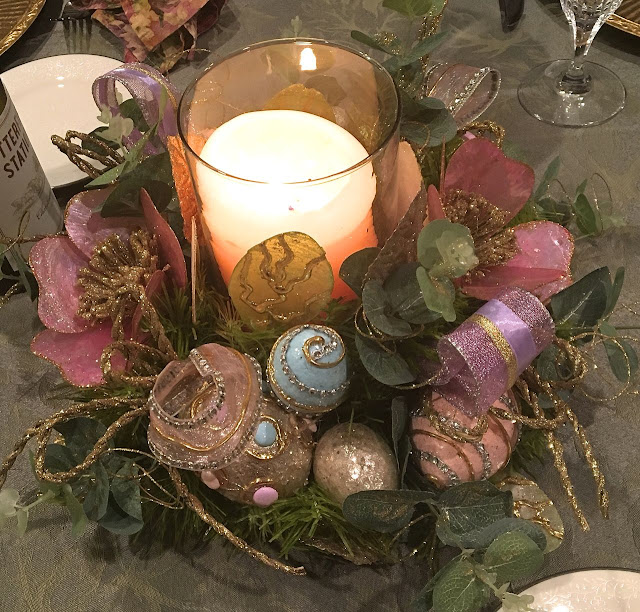 As we drove away from our friends' house I turned to the Gardener and said,
"I feel like I've been somewhere." A friend told me that once after a birthday
party at my house that I had made as special as I could. I loved what the phrase says
and have used it since when something is really memorable. 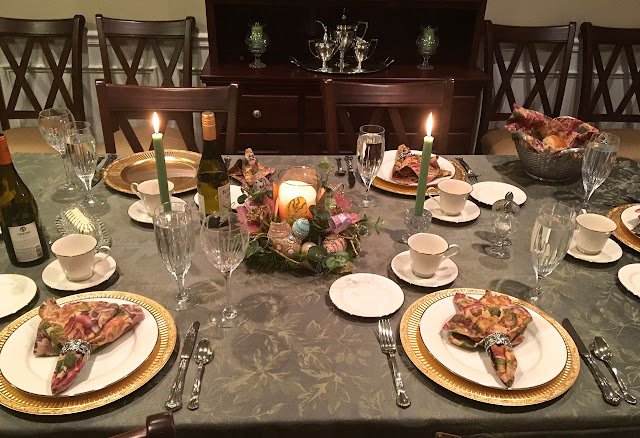 Our friends had invited us and another couple for dinner.
And she pulled out all the stops, or at least all the good china, crystal, and silver.
It was a very delicious meal, beautifully served.
Our hostess paid attention to every detail. The other guest also loves
a nice table, and together we noticed and appreciated everything
we saw and tasted. Such a fuss is certainly not necessary
and I enjoy casual dining as much as anyone,
but once in awhile it's really nice to pull out all the special things
for a good meal and to celebrate friendship.
What a great evening it was! 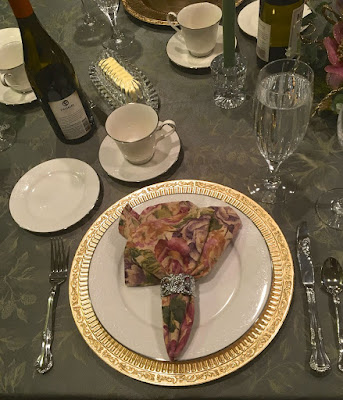 Maybe the "icing on the cake" was when she served tea
in her mother's old Hall teapot. It was very similar to my own mother's teapot.
All three of us women have lost our moms in recent years, and somehow
seeing that teapot just touched my heart in a special way. 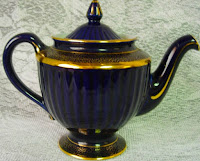 my favorite time of the week 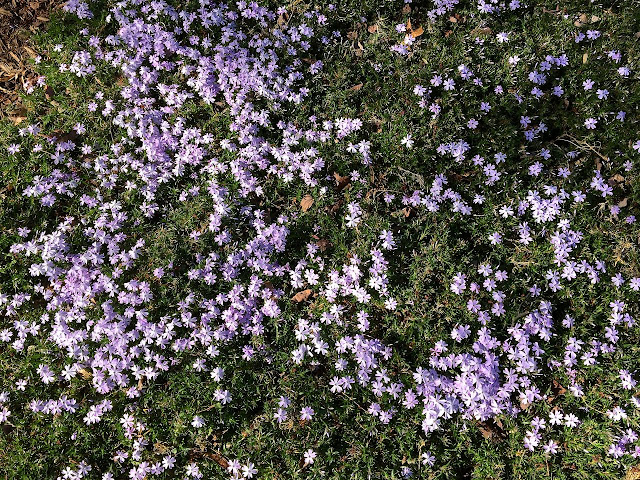 The phlox have started blooming. Each year they cover more area.
So lovely. 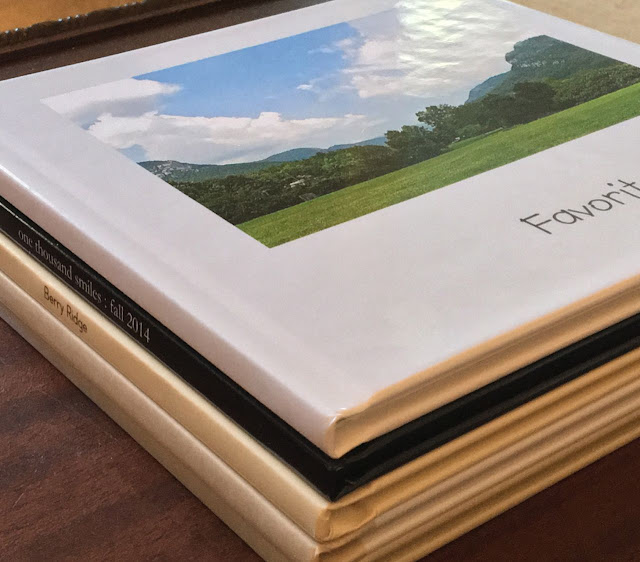 I'm growing a stack of these Sh*tterfly books.
The Gardener keeps finding me coupons for a free 8 x 8 book.
It's not hard for me to fill one, I love taking pictures so much.
So I haven't paid for one of them (except postage.) 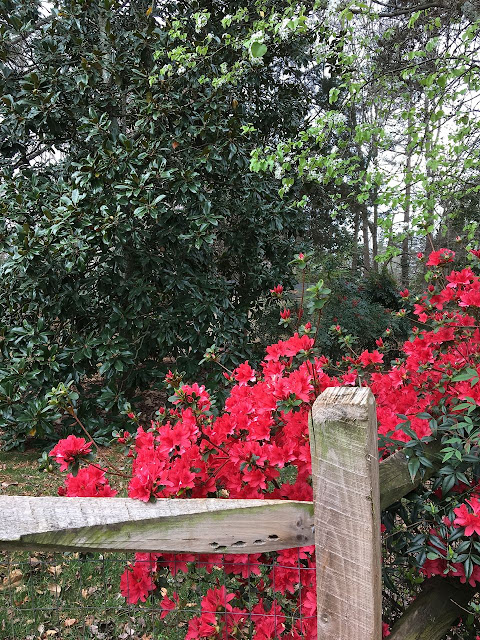 Azaleas are in full bloom but the dogwoods, who usually come at the same
time, are a bit slower. No one denies it's been a mixed up spring. 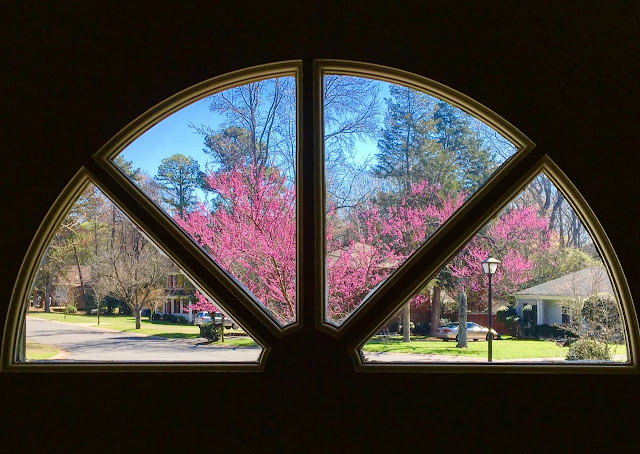 And if what is predicted actually happens this weekend, this pretty scene
out our front door window will be covered in white. Yes, white. 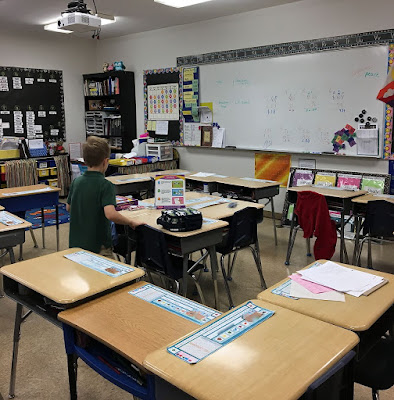 And my favorite time of the week?
The morning I volunteer in oldest ("Not so Little One's")
2nd grade class. I must admit to my brain being taxed sometimes
when I  help them with math problems, or try to remember
grammar rules, but it's good, so very good to be back in 2nd grade.
I love knowing her friends and talking school with her.
It has been a gift to me this year.

Five Bits About a Week

1. We gathered as old friends for tea this week to celebrate a new grandmother.
We gave her a few things to have on hand to help in her new role.
(not a grandma shower, but   a l m o s t …) 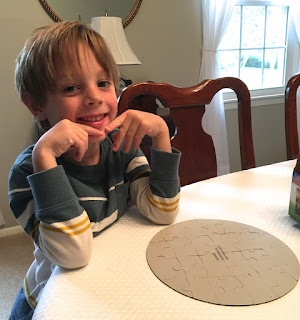 2. During a puzzle-making session, grandson wondered what it would
be like to make a puzzle with no picture on it. So we flipped it.
It was harder to do, and we're sure our brains got more exercise. 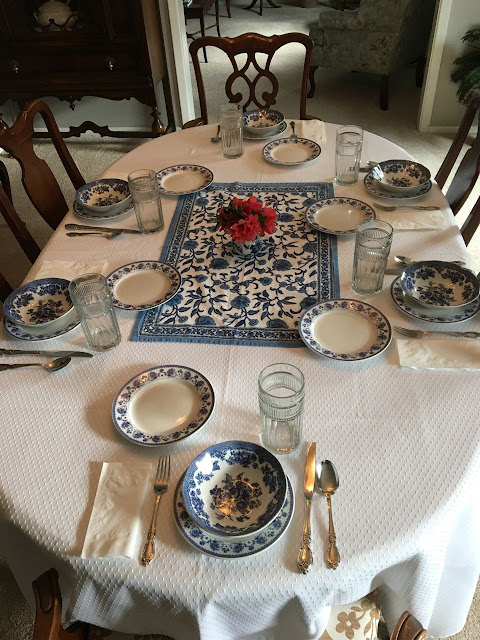 3. Four young men to join the Gardener and I for lunch? Certainly they
would not care about a pretty table, but my dishes are what they are.
I tried to make it very casual, and went outside
to gather some azaleas for the center of the table.
One of the guys declared the soup the best he'd ever eaten.
(As an aside, I purchased sweet potatoes for the recipe
and when I went to peel them was shocked
that they were white sweet potatoes. New to me!) 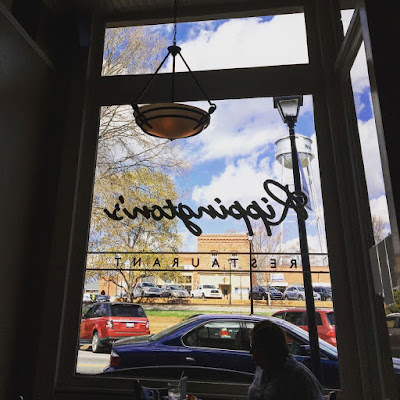 4. Last weekend was so beautiful the Gardner and I decided to take a ride after
working outside all morning. We drove back roads to a little town
filled with antique shops. But all we did was enjoy lunch at a "store front"
restaurant and then headed home for a nap. 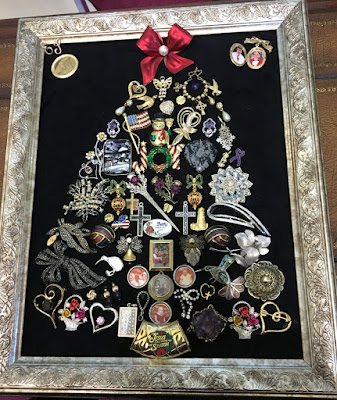 5. Several funerals in our church community all on one weekend.
One was a dear elderly lady who loved Christmas. Her
daughter took all her mom's pins/broaches and designed them
into a Christmas tree shape. What a sweet memory. 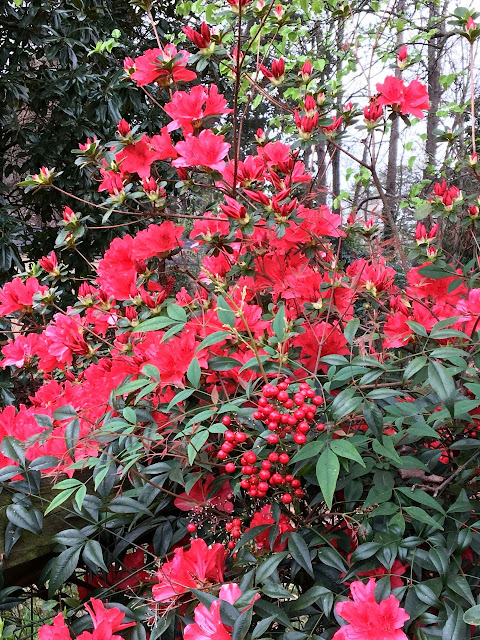 Bonus: Azaleas are in full bloom here, about a month early.
What a surprise to see camo holly berries in the midst of the azaleas.

Joining with Amy's Five on Friday.