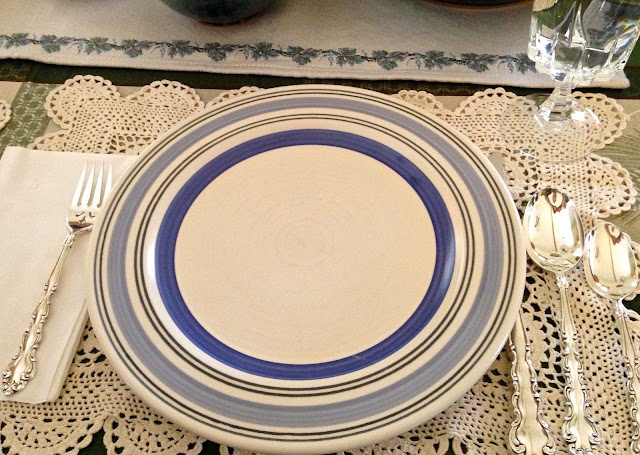 I even looked it up.
The word "familiar" has its root in "family."
And that's why when I visited my cousin's house--for the first time--on
our recent trip to Michigan, it all felt familiar. 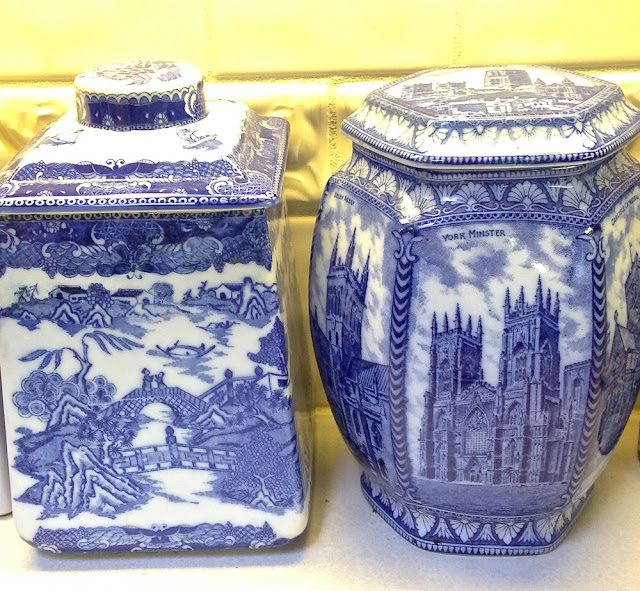 I knew it would.
Because her parents and my parents lived their last days in the same retirement
place, we saw a lot of each other after years apart since childhood.
She's been to my house quite a bit and
I knew we had similar tastes and interests. 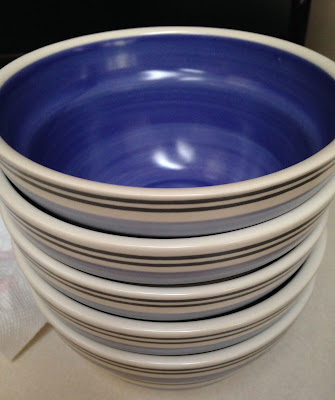 But I don't ever get up to where she lives.
Except for this month.
And stepping into her house felt so familiar.
Such a good feeling on several levels. 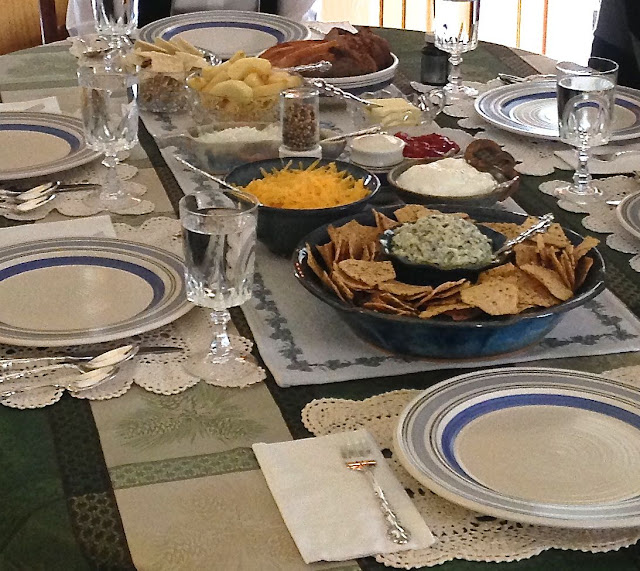 A delightful lunch like our moms would have served. 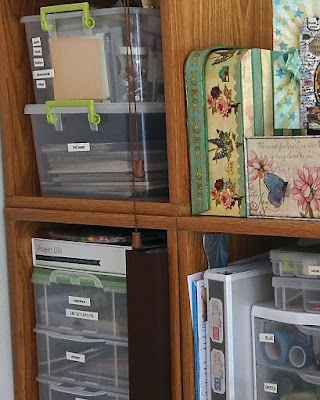 A craft corner far better organized than mine. 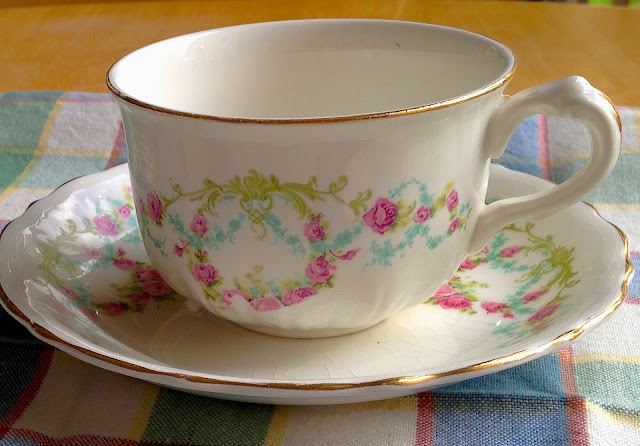 A sampling of our grandmother's china. 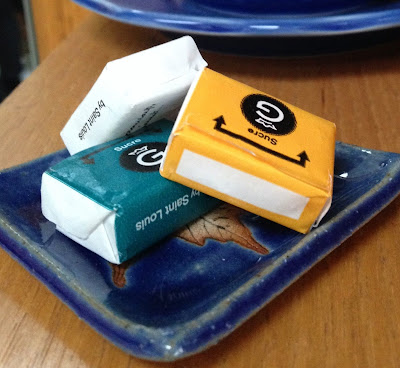 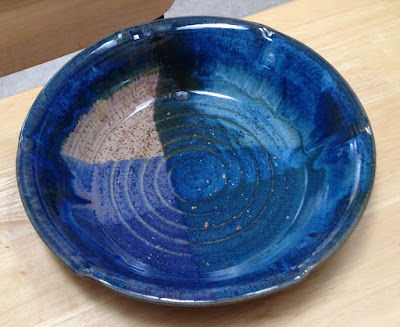 So much that looked familiar. That looked like family.
Her sister happened to be in town too, so we had a
grand cousin reunion together.
Our parents' generation now gone, we are
thankful to be keeping connected!

will it make a difference? 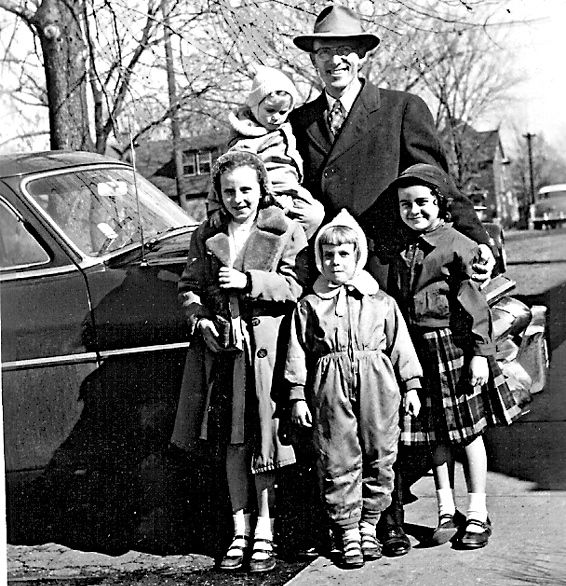 I've been known to worry a time or two. And maybe (lots) more.
Even though I know it is an absolute waste of time and emotional energy.
It accomplishes nothing good.

I went with the Gardener to see B*idge of Spies yesterday.
I had read how good it is so I expected to enjoy it but was surprised at how much I liked it.
I got a lot out of the film on several layers.
It was just that kind of a movie. The kind that sticks with you.
It was artsy, beautifully filmed, superb details, and so 1950s that I see "black and white"
as I remember the movie. (I had to look at a preview to be sure it actually was in color!)

It was based on the true story of a Soviet spy on trial in the US.
There was so much in it that I recognized from my idyllic childhood during the 50s.
From pink and blue bathrooms to big hats (as seen on my dad in photo above)
to school air raid drills and fear of the atomic bomb
we children thought of as we fell asleep at night.

(I'm not spoiling it by telling the story here;
just some side things I took note of and appreciated.)

As to worry?
That subject seemed a repeated theme as the lawyer
(an actor we all love)
kept asking the spy if he was worried or afraid.

"Will it make a difference?" the spy would reply,
or something similar to that, each time he was asked.
We all probably have a thing or two we could worry about;
right now I've got something looming on my mind.
This is a good reminder.
Worry does not make a difference. 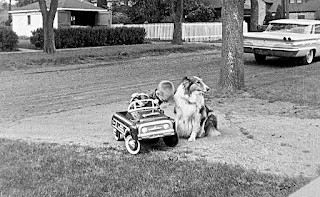 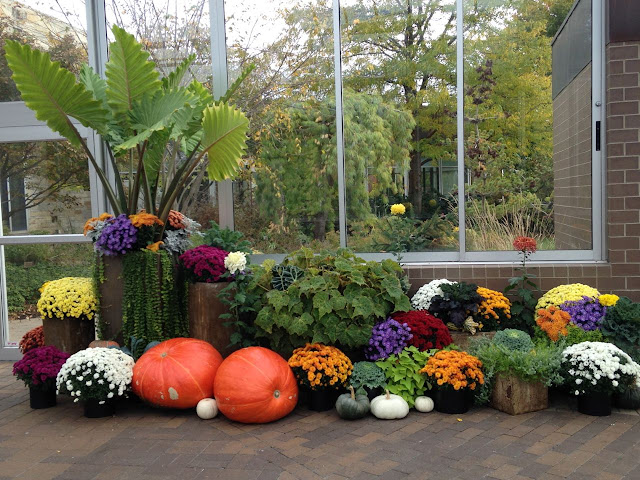 We've been on a road trip to Michigan.
The farther north we drove, the more color we saw.
At some points we saw bare trees. 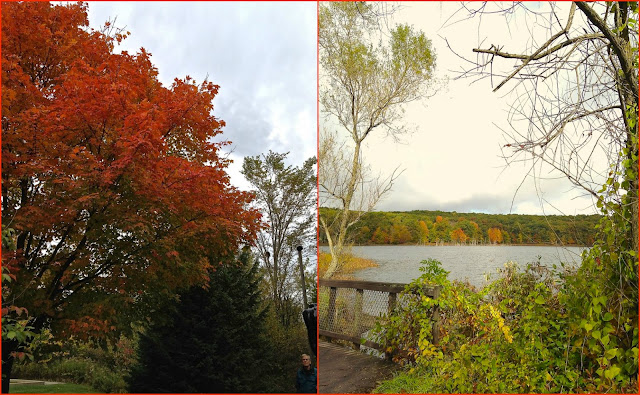 And experienced delightfully cold weather.
It was a feast for the eyes and refreshment for the body, worn out by hot and humid. 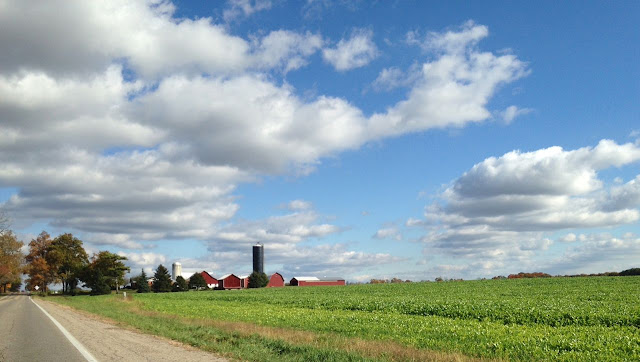 But I think even more than the color, I reveled in the tidy red-barn farms along the way.
As we drove home it was like rewinding …
here in the sunny south the leaves are still mostly green.
Joining Mosaic Monday.


We are babysitting. We love any chance to be with our three grands: 2,4 and 7. Their mom put a pie-shaped chicken pot pie in the oven and I set the table for a family meal even though an island meal would be so much easier.

The pie is out of the oven and in the center of the table. The two younger lean in, eager for their meal, but terribly disappointed when they realize they are not having apple pie for supper.

After the blessing, I suggest a dinner conversation. I start exclaiming about how green the grass is. Grandpa, aka the Gardener, talks about how all the rain we've had helps the grass. Which leads to the subject of the floods not far from us (the kids had just helped their mom that day with some relief aid.) "Where do the floods go and how to they move?" Four-year-old grandson is thinking deeply and on to all kinds of questions. When the Gardener starts talking about evaporation and other big words, I suggest we find easier ones. Meanwhile the talk seems to ring a bell in our seven-year-old B's mind. "May I share the science experiment we did today? All I need is a bowl, a cup, and a piece of paper." Of course!

I don't pay any attention as she preps the experiment. I'm busy finding something else at least a bit nourishing for the chicken pot pie protesters to eat. Suddenly I realize B's coming towards the table carrying an overflowing bowl of dark blue water. Overflowing on to the hardwood floors. I'm talking dark blue--maybe 10 drops of food coloring or more.

I clean up the floors, put the whole deal on a tray and carry it to the table for her. The experiment appears to be proceeding with a flourish, as she explains how water passes through various things.

I come back to the table with some toast for the little ones when I realize the upside down glass on a piece of paper is failing as an experiment. There is blue water everywhere again, this time on the table. I run for paper towels and as I mop it up again, with a sick feeling, I realize it has reached the seam in the table where extra leaves go.

Drip, splat, drip onto the off-white rug under the table … a dark blue blotch forms, perfectly centered in the middle. But thankfully it's so centered it's not visible unless you happen to be on the floor looking under the table.

Our grands' parents were easy when they got home, and rather liked the story that went with blotch. I'm sure DIL will try to get the stain out. Meanwhile, in a small way, it reminds me of a house my sister, at age four, etched with a pin onto our mom's mahogany dining room table. It's still there to this day, now in my sister's house, and has a story to go with it.
Posted by podso at 4:51 PM 19 comments:

more from along my way 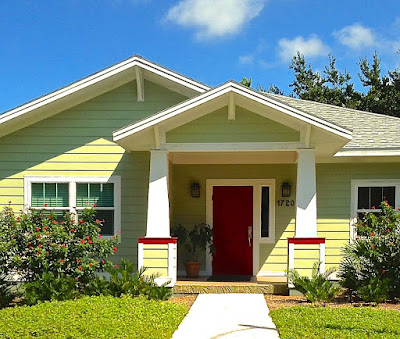 A lovely week at my sister's house; the luxury of time together.
(A colorful cottage we admired.) 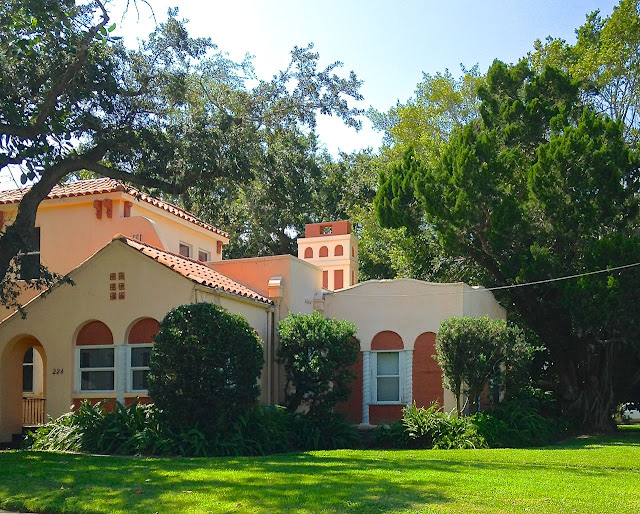 We love to "house shop" and enjoy the creativity of others.
The weather was almost unbearably hot and unsettled until
the very last day when it became more what it should be.
Good food at her table is a given. 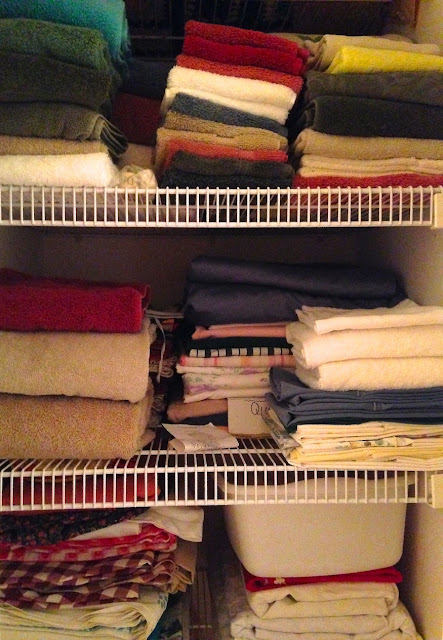 Sometimes it helps to clean out a linen closet with a sister's help.
So we did. 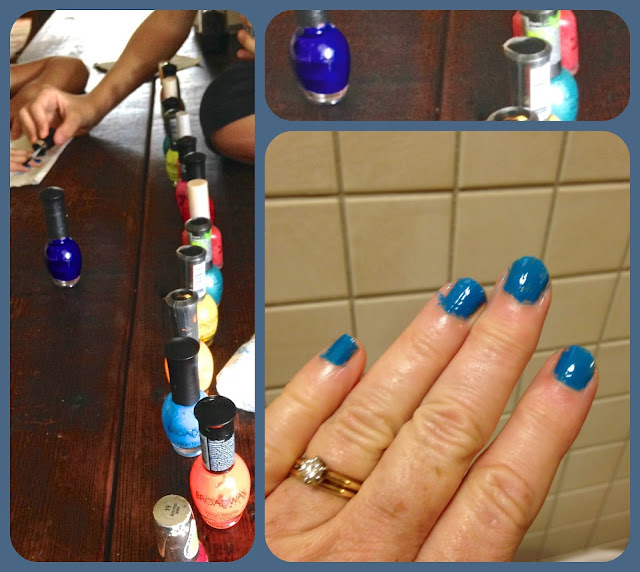 A visit to the great nieces resulted in a manicure.
I thought they did quite well staying "inside the lines."
It was a bit thickly put on, maybe because several
took a turn! I was amazed at their array of
colors; purchased originally for a homeschool science project!
Something new at the local library
The farewell sunset was even a bit stormy like the weather had been and would be.
A long ride home circumventing SC flooding.
We determined to enjoy the expanded ride through Georgia countryside
that was new to us. And we are thankful to be safely home again.

Sights seen along my way in recent days. 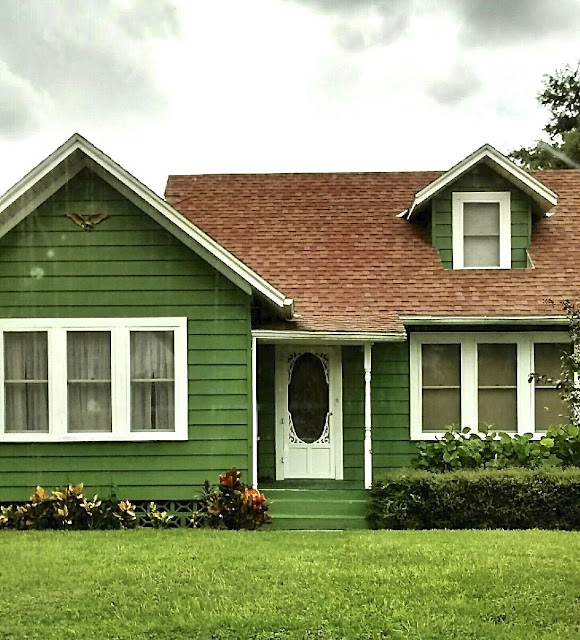 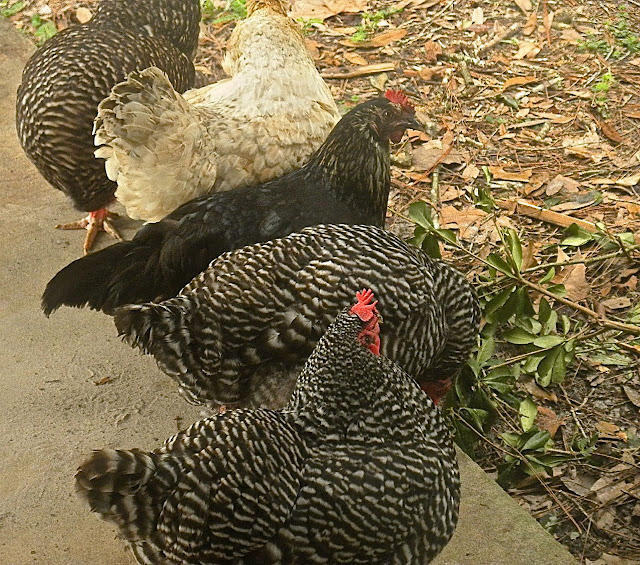