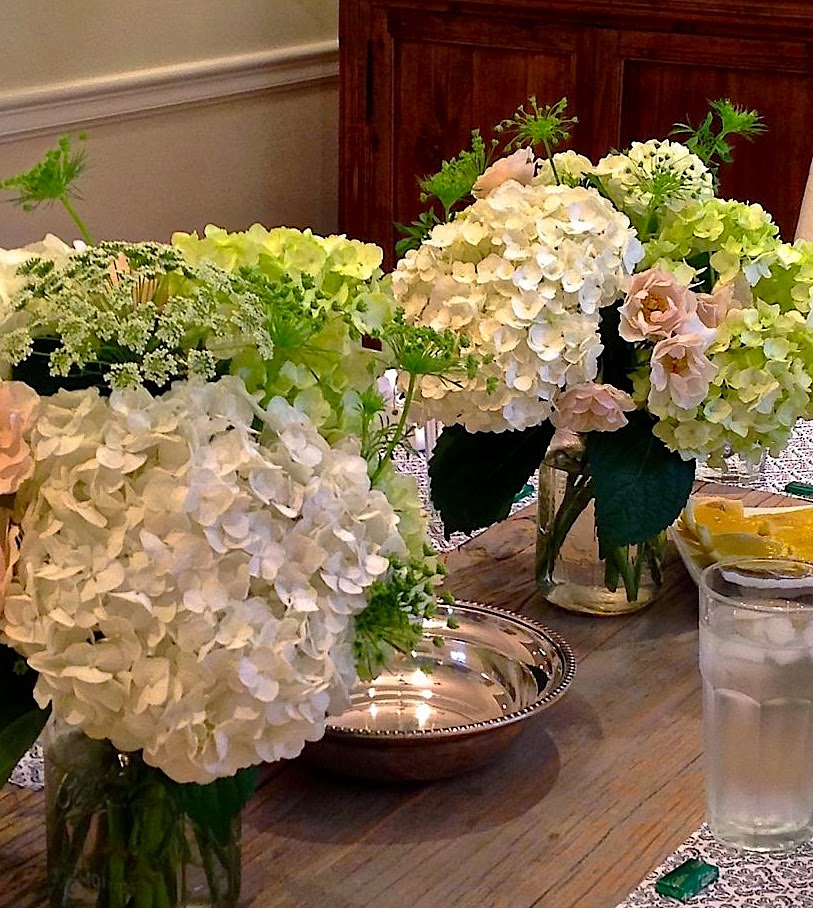 Early in the morning I donned my black slacks, comfortable shoes, white shirt, pearls
(I knew she'd be wearing hers) and headed over to a friend's house where we were going to
celebrate a wedding. We put matching aprons over our black and white
and set out to give a bridal brunch on the morning of the big day.
What a sight met my eyes. This friend can really set a pretty table.
The flowers alone about took my breath away. 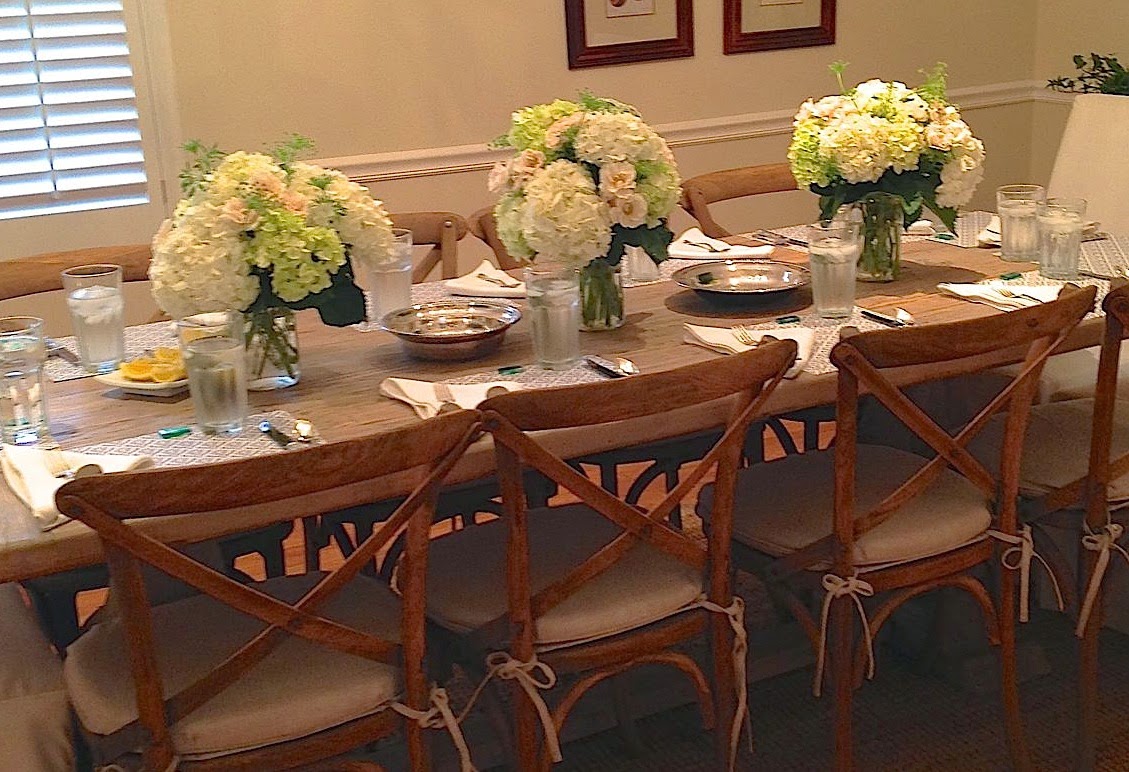 And it was plain fun to serve the beautiful bride, her bridal party and family members.
I always wanted to be a waitress, at least for a day,
and run a B and B for another day …
so I enjoy when I don't have to sit at the table but can just focus on serving. 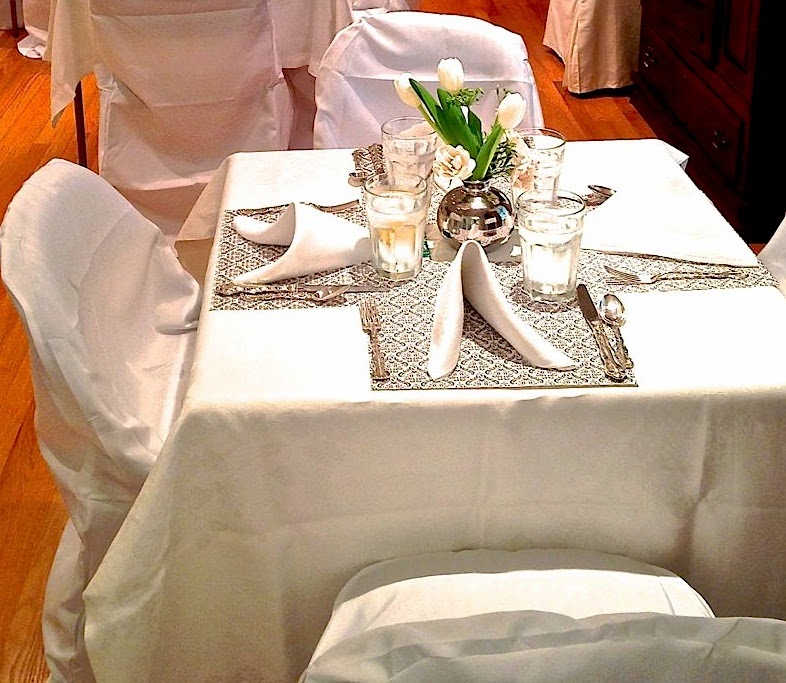 We had small tables in the living room since there were 22.
Can you believe these chair covers for a song from the store with the red circle?
Maybe my biggest compliment is that someone
thought we were caterers. 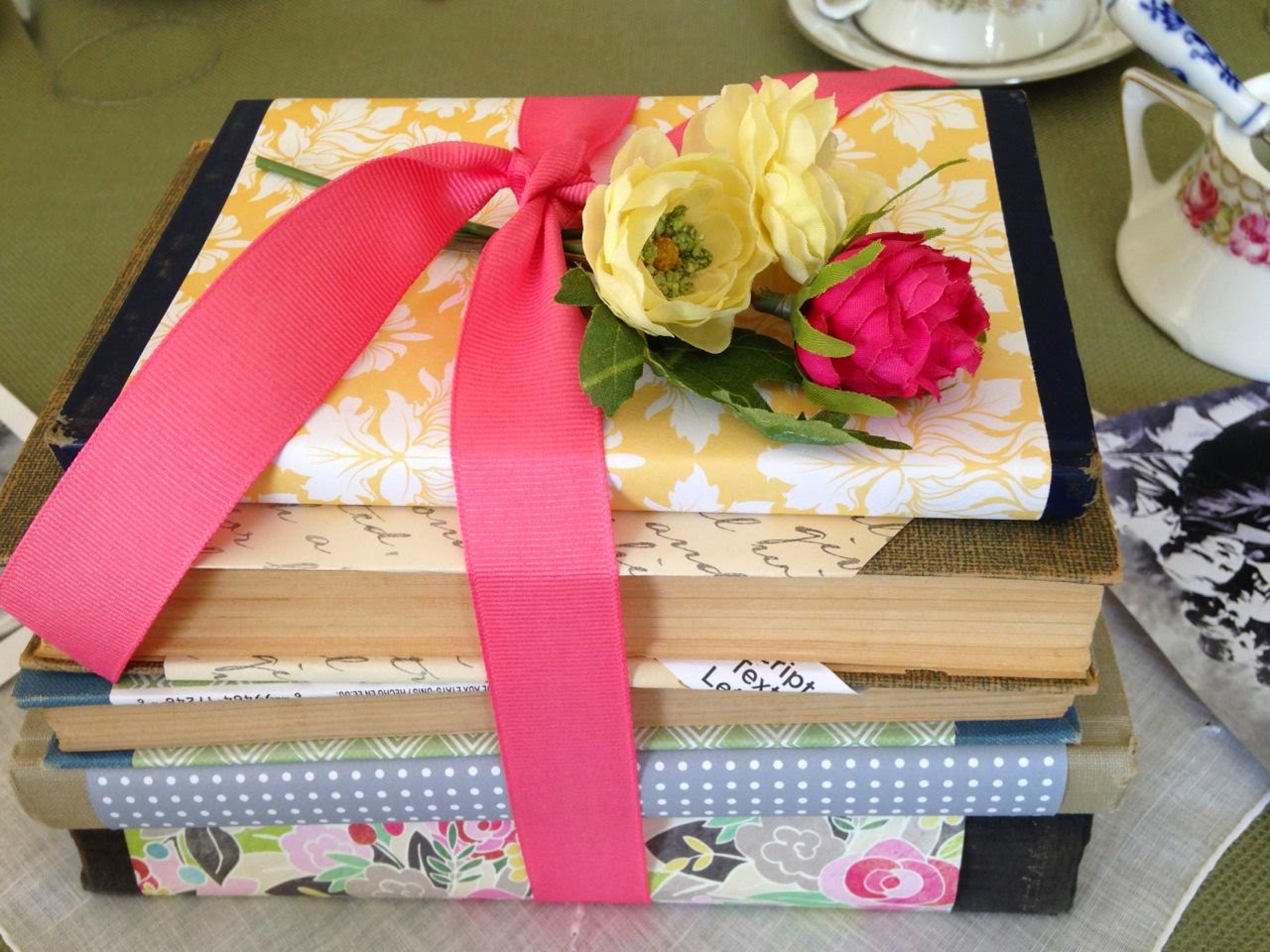 It's been a long time since our book club has met. Maybe it's just as well
as our book this time was over 500 pages long. Well written by a great writer,
Eric M*taxas, the book B*nhoeffer: Pastor, Martyr, Prophet, Spy
takes a long time to read and not just because it's lengthy.
It's causes you to stop, think, discuss and ask questions. 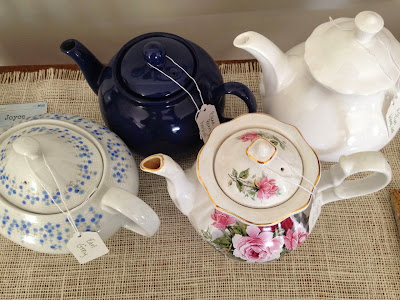 This time we met for a simple tea at a pretty table just because we love
pretty--so why not? Bonhoeffer started his life in privilege and
was well educated. His mother probably served tea at a lovely table as well.
It was later, as he stood his ground and
"submitted to no one and nothing except God and His Word"
that this young German faced a not-so-lovely life in prison. 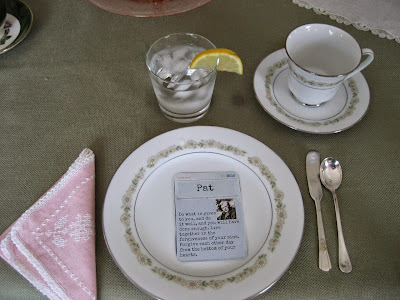 He was a prolific writer and his quotes are meaty and plenty. 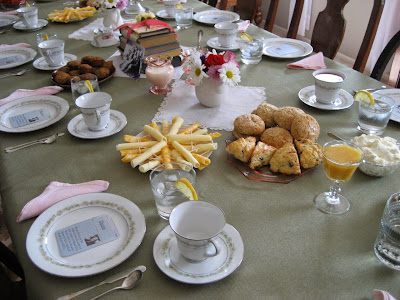 There is so much to say about this man who lived his life with passion
for truth and a commitment to justice. He was willing to give his life for the cause
and he did. The 70th anniversary of his martyrdom was just a few weeks ago.
We sat our friend from Germany on the highchair and she
joined in our lively but sobering discussion. 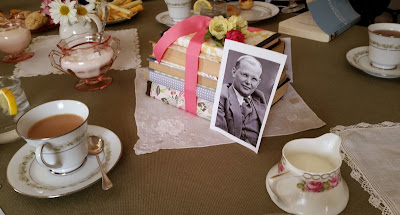 Would we do the same as this brave man?
"In ordinary life we hardly realize that we receive a great deal
more than we give, and that it is only with
gratitude that life becomes rich."
~Dietrich Bonhoeffer
Posted by podso at 5:15 PM 25 comments: 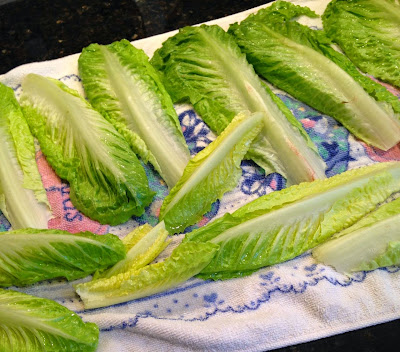 I've washed leaf lettuce, such as Romaine, this way for so long I don't know if there is another way.
I used to use a salad spinner but thought it occupied a lot of room in my limited cupboard space
for the little I used it since it didn't seem to spin it all that dry.
So I lay it out on an old terrycloth absorbent tea towel, layer upon layer.
Sometimes I let it sit like that for a few hours, or I roll it up and let it sit rolled up until
I'm ready to make the salad. Or if I'm just washing it for use another day, I'll put it in a
large baggie with some paper towel to absorb any left over moisture. 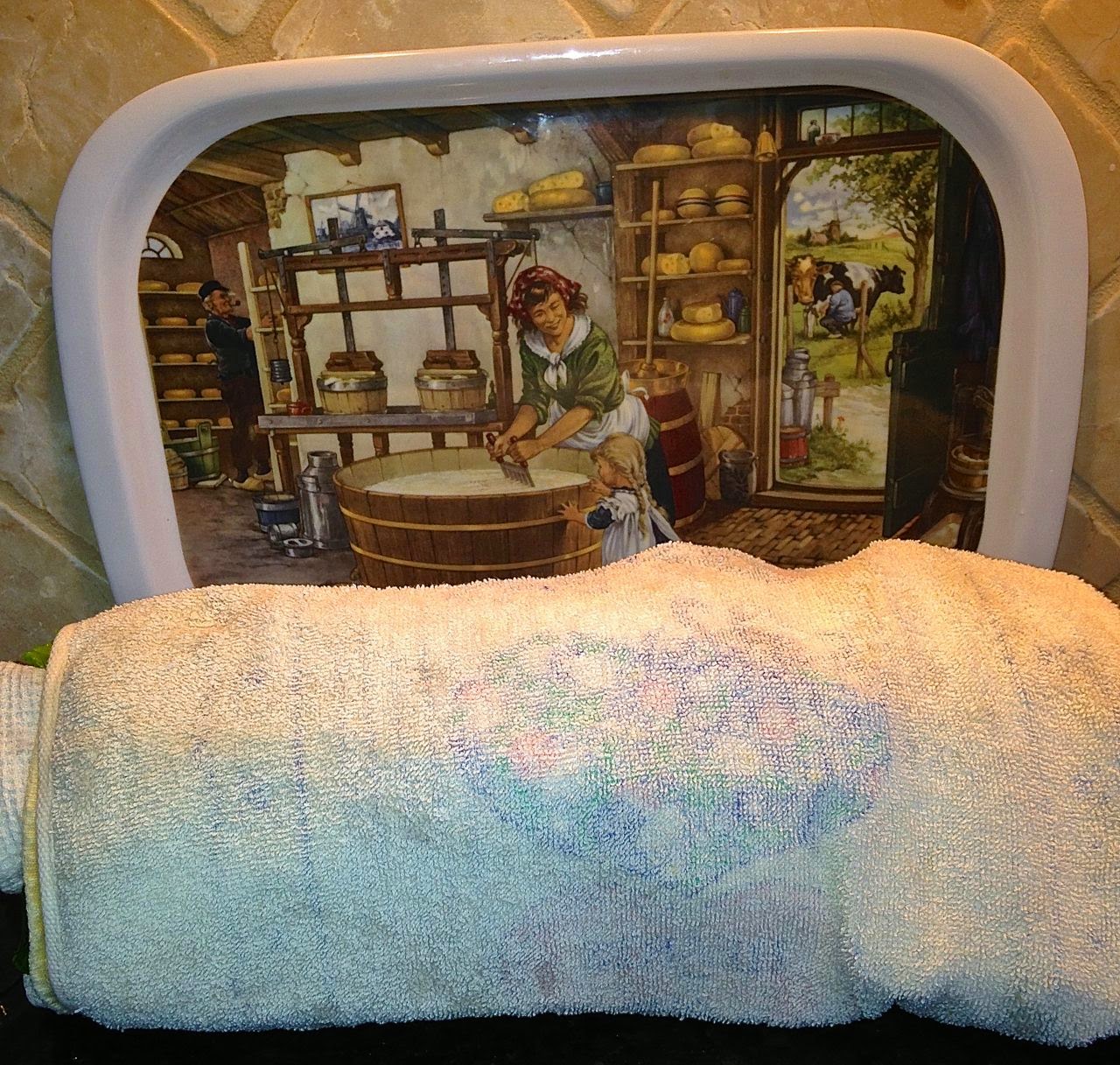 My method reminds me of my mom washing hankies or other
fragile linens, wrapping in a towel, sticking in the
frig for ironing later on.
But that's a story for another day.
I'm curious--how do you wash lettuce?

the flowers of spring 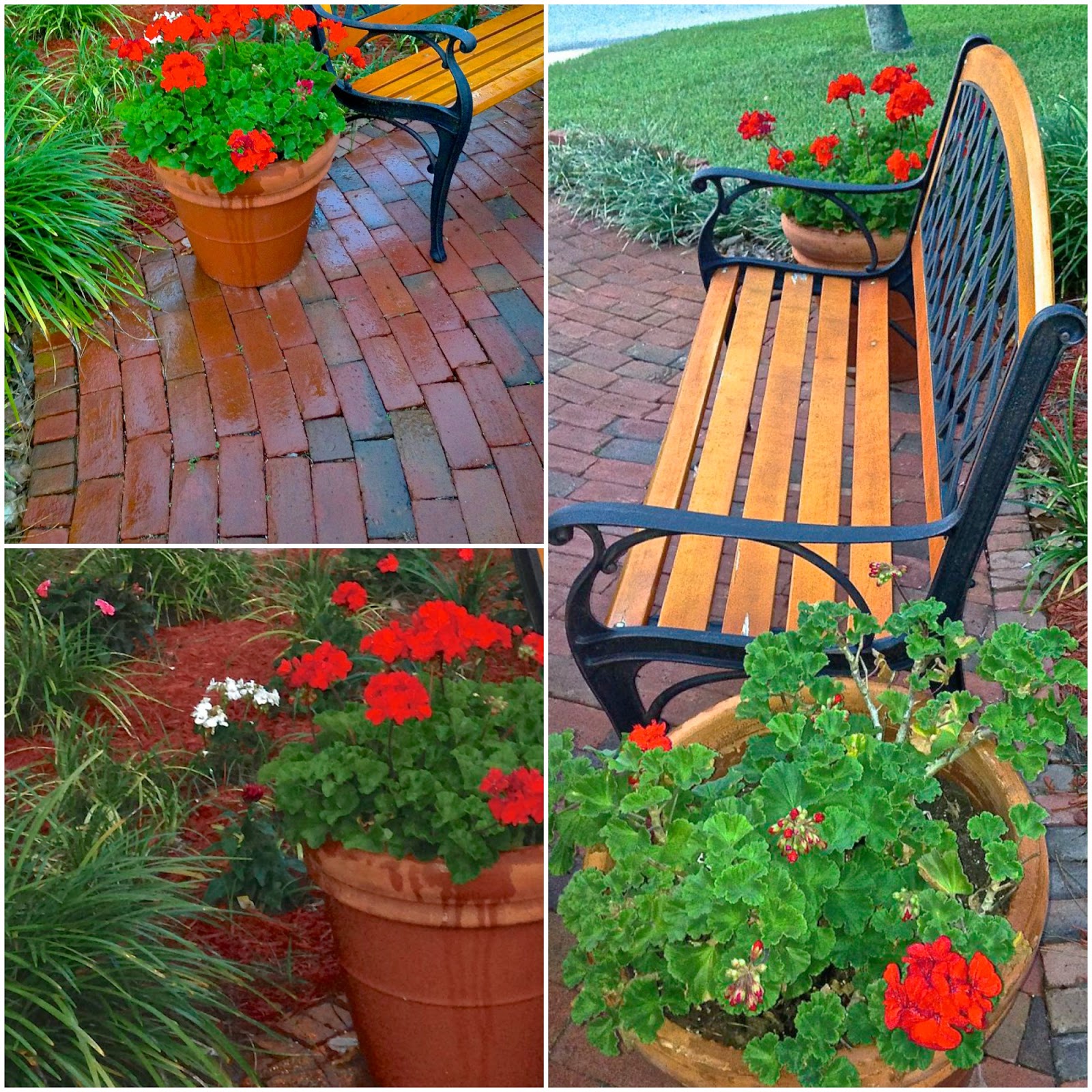 A house we stayed at recently had geraniums in full bloom, and other flowers
we would see in summer where we live. Of course Florida is on a
different flower schedule than we are. These were taken in early evening.

"The flowers of late winter and early spring occupy places in our hearts
well out of proportion to their size." ~ Gertrude S.Wister

what's in a friendship 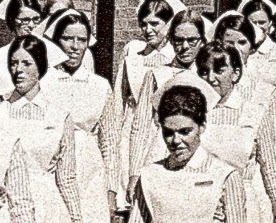 It had been a mere 45 years since we had last seen each other on her graduation day. But when Sara and I walked across the restaurant into each other's hug, the years slipped away like a tide fading at ocean's edge. Our husbands, at a distance, came forward to shake hands and meet each other. The Gardener and Sara had been college classmates, but we had not known her husband. Of course we liked him.

Sara and I knew each other best at nursing school. She was my "big sis" there and welcomed me as a newbie and showed me the ropes of how to survive in a competitive and challenging environment. I was always grateful.

We connected as good friends do, with common interests and passions. And we just liked each other. Christmas cards and occasional letters kept us connected over the years.

So how would it be, this meeting again after all these years? Two gray-haired, retired nurses, having lived full lives--marriage, career, children, now grandmothers--would we still connect and know each other?

Can you guess? We didn't miss a beat. We had a lot of catching up to do (Fb has helped), but we quickly were able to get beyond the news of children and grandchildren. We talked more deeply about life because we trust each other and care about the same things. And we are still basically the same girls as we were back then.

So I concluded that once a friend, always a friend. Whatever drew us together as friends in the past is still with us today. Haven't you met an old roommate or high school friend--or even a blog friend--and found it easy to pick up just where you left off?
Posted by podso at 6:15 PM 17 comments: 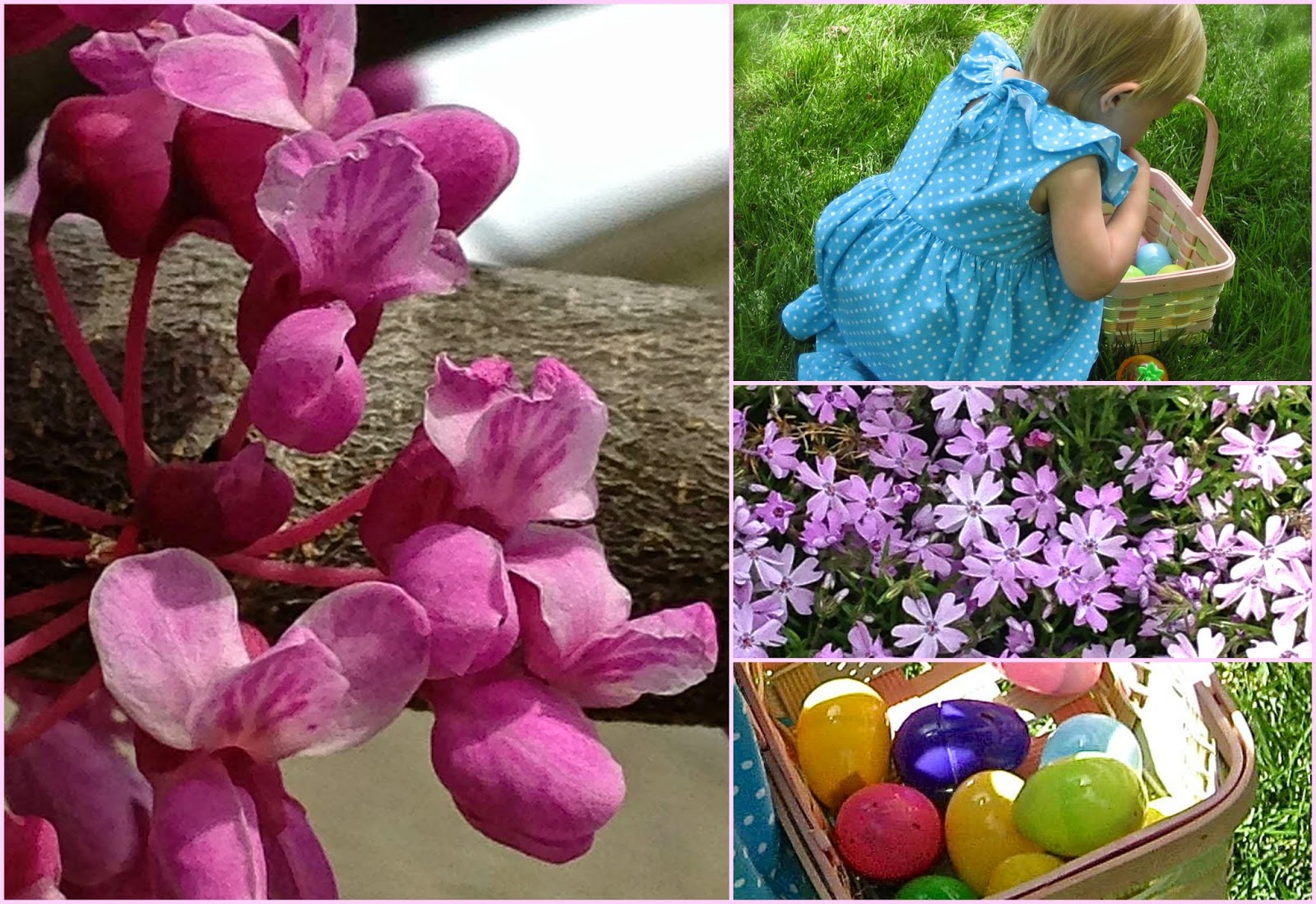 The weather beckoned us outside this weekend.
I always enjoy making mosaics and joining in Judith's Monday Mosaics.
Posted by podso at 10:53 PM 27 comments: 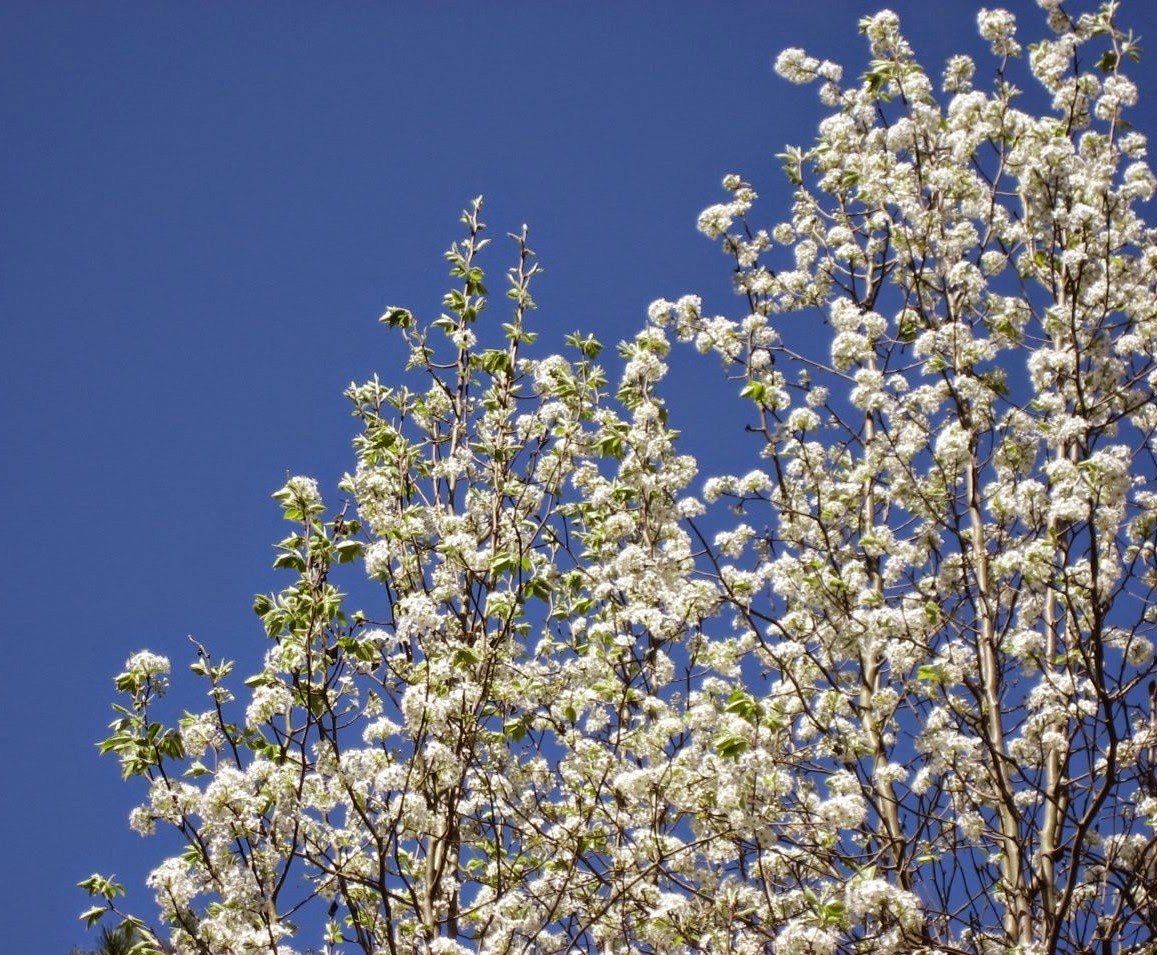 "Our Lord has written the promise of resurrection  not in books alone but in every leaf of springtime."  ~ Martin Luther