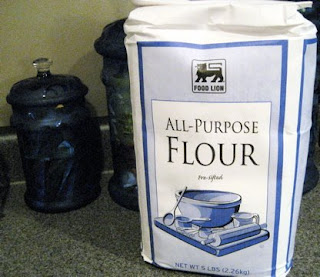 Early yesterday morning, on our way to Tuesday, we found gas. All day I felt like I had opened a big, exciting present. Gas is difficult to find right now, and that along with the news about a big bank in town puts a feeling of  "something not quite right" here in our fair city. And then there's the national news.  The concerns about what may happen remind me of the Cuban Missile Crisis days when we felt some fear. I still remember the grave look on my dad's face as he listened to President Kennedy speak on the radio (note: my parents were behind the times by choice, and had no TV in our house until we had left for college).
Maybe we are feeling it more in our city with the gas lines and the bank news, but for whatever reason, I thought maybe I should stock up on flour and start making our own bread again. That's what you always think of when you hear of an economy heading south.  Bread lines of the 30s. Don't think I'm panicking, it's just that homemade bread sounds good anyway. I used to make all our bread, especially in the days living in Africa (where we sometimes had two-day gas lines--taking turns sleeping in the truck).
To lighten this up, I'll tell you about the "phantom" gas lines at W*lmart. I parked the car near the gas station Monday on my way to food shopping, and watched one false line form after another. Cars sped around the station like bees around a flower--looking to see if there was gas. One or two cars would stop by a pump to check and immediately about ten cars formed a line. They would realize their error and disappear and within two minutes another line falsely formed. It was both funny and fascinating to watch, and I sat mesmerized for a few minutes before I headed inside for the long walk to milk and eggs in the far corner of the store.
Posted by podso at 6:58 AM