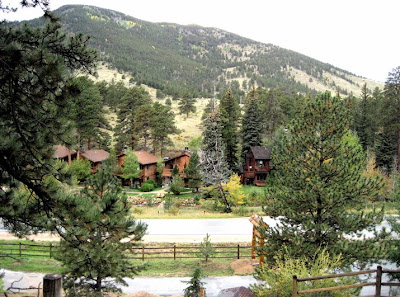 While visiting friends in Colorado recently, we talked with Youngest Son on the phone. Turns out that on that day (back in the southeast) he had taken care of a patient who had slept in the very same bed, two weeks prior, that we were going to sleep in that night! It all got connected through conversation that started with––well, I actually don't know how the conversation started, but eventually a question came during a break in the dental work, "What does your father do?" which led to connecting the dots of us having the same friends––with whom  he, the dental patient,  two weeks before, and now we, stayed overnight.
A recent Wo*ld magazine article talked about the "Six D*grees of Separation Theory."  Apparently M*crosoft has done a study of instant messaging conversations among 180 million folks ... and found just 6.6 degrees of separation between any two users of its instant message program. So, in essence, any two random people in the survey were separated by a string of just 6.6 acquaintances, on average. The researcher suggests a "social connectivity constant for humanity." (Eric Horv*tz in the W*ashington Post.)
How many times, when a conversation occurs, we find someone who knows someone we know. Some amazing connections (especially, I suppose, the longer one lives.) It makes life interesting, doesn't it, and we say, "It's a small world."
Photo: Estes P*rk and my illustration of six degrees ...
Posted by podso at 7:52 AM