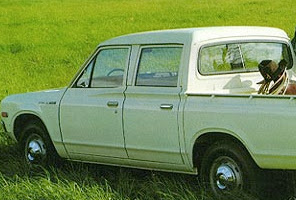 I've been robbed before, but never from right under my nose. And so it happened on a quiet road on the university campus in our adopted West African city. Our country was at one of its lowest points economically––ever. There wasn't much to buy to eat, and there was rarely gas in the station pumps. In fact we never found it except the time I remember the Gardener spending a day and a night in a gas line. I think he got maybe a half a tank.

But hope springs eternal and the Gardener was always hopeful that one day we'd find gas available (called "petrol" there). And he wanted to be ready, so he drove around close to "E" and carried a geri tin of petrol in the back of our pick-up truck. He also carried some empty ones ... just in case there was extra gas (there's that hope!)

So one day I drove our double cab pick-up over to the university to buy some eggs from a chicken farm there. Sputter, sputter. The car went dead. Just as I was thinking some not-so-pleasant thoughts about the Gardener and his stubborn optimistic spirit, along came two young men. I asked if they could syphon some fuel for me from the geri tin into my gas tank. They did so and I hopped in the car to continue my errand. But it wouldn't start.

"Let me try," the kind young man offered. I got out to let him in the driver seat. He got it started and promptly drove away. And didn't come back for a  l-o-n-g  time. Standing there on the tree-lined college campus road, I felt very sick to my stomach. I thought our truck was gone for good. While he was away he rifled through the glove compartment and must have thought more seriously about what he was doing as he did bring the vehicle back. So I guess I was only temporarily robbed––but it was one of those moments etched in memory. I skipped buying the eggs and tore home, ran into the meeting my husband was in, and immediately burst into tears. I guess the stress had been great.

And I insisted that I learned to syphon. From then on whenever I took the truck, I first syphoned to a quarter of a tank. It's amazing how much more secure I felt once I had developed that (choking) skill.