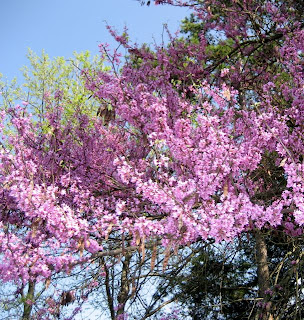 The other day I lost my cell phone. I lose things easily--or at least it seems I misplace something every day ... but I've never lost my cell before. This was a "serious loss" in that I really had searched everywhere, and called my number without hearing it anywhere in the house. The complication was that the Gardener and I were traveling separately and needed to each have our phone. We are due to change/renew our contract and if I had to buy a new one I didn't want to have to make a quick decision.

There was one possibility that brought hope through a restless night, but I would not know until the next morning when my "Tuesday office" unlocked it doors. Sure enough, the next morning a coworker found it for me, innocently sitting on my desk where I had left it in a rush, gathering up papers and laptop as I went out the door. The relief was tangible. The Gardener left on his way, and we were very grateful. 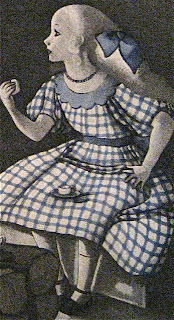 A friend, Christiania, who often shares her clothes with me, had passed along a very nice pair of very cute "flats" recently. Before I left for my Tuesday office to retrieve the phone, I decided to try them on one more time. They really were just a tad too large for me. Flapped around when I walked. But oh so cute. I decided to take them along. I had in mind a friend or two at the office who might be able to wear them.

The first friend loved them and tried ... but her feet were too big. The second friend knew her feet were too small. The third friend's feet were too wide. The fourth friend's feet were too large and she needed support in her shoes. I began to think I was searching for Cinderella! The fifth friend wasn't in her office. I headed for the kitchen, shoes in hand, out of ideas and planning to grab a coke for the ride home. I passed S's office. Stopped and looked in. "S, what size shoe do you wear?"  Bingo.  And she "happened" to be dressed in brown and black. The very cute shoes were brown with black accents. A smile grew on her face as she reached for them and took off her old, slightly scuffed brown shoes. "You know," she told me, "just this morning when I put on these sad, old shoes, I talked to God about how much I needed a new pair of shoes."

"What?" I asked her to repeat what she had just said. We looked at each other, our eyes filling, smiles so broad you could measure them. The shoes looked perfect and so cute with her outfit.

The night before, when I knew my phone was lost and I was filled with frustration, I didn't handle it too well. Once I calmed down, I reminded myself that God ordains my life, even, I believe, to the small details of lost phones. I wondered if there was another reason besides my need to let go of my plans and accept more calmly the chaos that comes into my life. The next day, when I knew where my cell phone was, I thought again if there was some other reason I was going to make that long drive to the office. What made me stop in the closet and look at the shoes again? And why did I pass S's office to get a coke (very unusual for me)? There's an old hymn that says "God moves in mysterious ways, His wonders to perform." 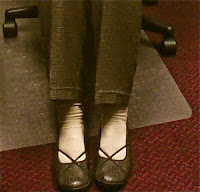 Joining with With a Grateful Prayer and a Thankful Heart for "Think on These Things."
Posted by podso at 5:05 AM