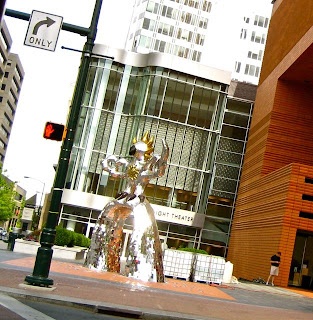 S. T. R. E. S. S.  Traffic.  Rush Hour.  Road Work.  Late.  Slightly Lost.  And it was all really my fault ... I chose a new back road route to a meeting and it turned out to be far worse traffic than the main highway we were avoiding.

LOL at myself. It took several rounds of this to realize it was I who was calling my husband's phone. Technology at its finest. In my defense, there had been some switching on quick call numbers on my cell phone and I had not (obviously) gotten set in my head which number --#7 or #8--was for which guy. I'm sure the stress of being late and lost did not help. Yes I laughed and still laugh at myself. And it's no surprise I'm sometimes called "ditzi" rather than my usual knick name.

Photo of our new art district ... I think that larger than life piece of art could be me directing traffic. It's just what comes to mind!  :-)
Posted by podso at 8:09 AM