When I first started blogging almost six years ago, life around me was changing at a frantic pace. Our nest emptied, my father died, all his sibblings and spouses died, my mother downsized again, our dog died, our church was going through difficult times and dear friends were moving to other places . . . and then there were the dramtic changes at both of my work places. Changes so many and coming so quickly I often wondered if I could keep up. I think blogging helped me as a place to express myself creatively, and gave me a quiet room in my life where I could focus on something else for a few minutes. It became a hobby.

Around that time I remember reading an article written by a 50-something woman who was expressing similar feelings about the significant transformations in her life. She gracefully was accepting a new stage of life, but I'll never forget how at the same time, she expressed that she had reached the age where, should she die, no one would gasp in shock and say she was too young.

I was just learning how to incorporate photos into my posts and mentally began to compose a post about change. I decided to call it "pocket change" and carefully practiced on my camera's little close up lens to get a good image of coins. I decided to put the post off until things settled down a bit.

Now, nearly six years later, you can probably guess that nothing has settled down. Change has become the new constant of my life. I put off writing this post as everywhere I looked, life was transforming. I believe it is somewhat unique at this time in our world, partly due to technology. I don't think my mother experienced anything quite like this when she was my age, though of course she has plenty to adjust to at nearly ninety, and she does so with such grace and contentment I am in awe and thankful for her example. 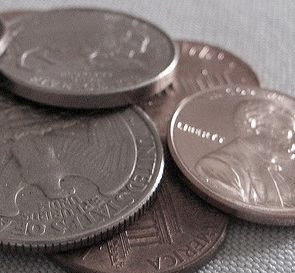 Since this is my 1000th published post, I decided to dig up the coin photo and go ahead and write the post about change. There's not much more to say except this: my prayer is that I will always adjust to change with joy and grace, knowing each one that comes along is part of God's plan for me. He gives me strength for each new learning curve in my nursing career, for each glitch or new element in my computer design program and for each new "whatever" that arrives in life,

I find myself sighing a lot, which may be a way of whining. I'd rather not sigh, but instead find joy in each moment of being alive, find gratitude for having the ability to work, and find delight in each experience that comes my way. And as for the changes? May I accept them as part of life and tuck them away ... like "pocket change."
Posted by podso at 6:34 AM