Not Your Everyday Green Bean Casserole 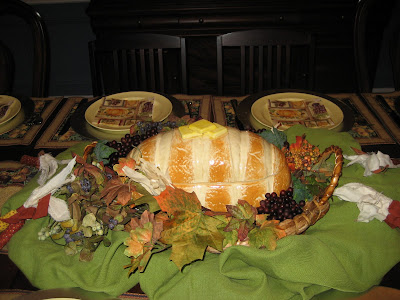 When I put a spoonful of Youngest Son's greenbean casserole on my plate, the lima beans mixed in with the green beans were a surprise. "Oh, something new," I suggested. Apparently the full story is that when he went to make the casserole, they were lacking in green beans, so he creatively substituted the limas. We were around the Thanksgiving table of Youngest's Son's wife's family. We decided this might be remembered as the "lima bean" Thanksgiving. Little did we know what more was coming.

A beautiful ceramic centerpiece was opened towards the end of the meal to reveal small envelopes tucked inside, filled with the tithe of a money gift given to our host family. As we each took and opened an envelope, we found an amount of money to share with someone in need. There would undoubtedly be a story for each of us to tell as we put our money to work. "The Gift that Gives Back." Now this would be a Thanksgiving to remember!

Later, Spouse beat Youngest Son in a game of ping-pong. Competitive streaks being what they are in the male species, a second game ensued. As Spouse forgot his age and sprung for a far ball, his body kept going into the wall, hitting his forehead on the light switch. End result: almost-a-dentist son stitching up father, closely observed by dentist father-in-law holding a strong light. A nice even row of six stitches––he did a good job. Now there will be several stories for history to tell about this Thanksgiving, and much, much to be thankful for!
Posted by podso at 6:27 AM