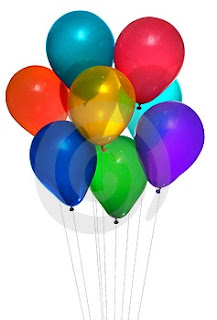 A phone call from someone in heaven--during a memorial service? I've never experienced that before. But sure enough, in the middle of a sentence, the speaker excused himself and reached into his pocket to pull out his cell phone. Then began a conversation between him and Carol, who reached her heavenly home earlier this week. We were gathered amongst balloons, and refreshments of strawberries and ice cream, to celebrate her life.
Carol lived and died well. God allowed her time when she knew her death was imminent, to gather family around her to say good-bye, and to even make plans for her celebration (what she wanted her funeral to be called.)  More than likely with this phone call she was checking to see if her plans were being carried out. With great warmth and humor, the speaker bantered back and forth between his cell phone and the audience. It was so well done, and felt so real, we all thought we had just been with Carol again.
Carol fought her cancer for 2 1/2 years. I've never seen anyone with so much energy and passion for life, fight so long and so hard to live, yet accept what she had been given. At all times she sought to glorify God through her illness. Carol wrote a daily blog to keep us updated; my favorite was one of the  last she personally wrote, when she knew her fight was finished.
She was a mentor and encourager to me personally, and helped me a good deal with my work. I will miss her––not just for her help to me, but for her bright spirit, smile, vast knowledge, and extreme enthusiasm for, and interest in, life. What an example of how to live!
Last year I sent her a link to an article in Chr*stianity Today by former White House Press Secretary Tony Sn*w, also our most favorite news commentator, about his cancer and the blessings he had found in it. I've heard her refer to it more than once. How ironic that today––the day we say good-bye for now to Carol––that Tony Sn*w also loses his battle with cancer. (I wonder if they've met yet inside heaven's gates?)
About both Carol and Tony you could say, as Abraham Lincoln said, "It's not the number of years in your life, but the life in your years." They both filled their years with life.  Many people prayed for Carol to be healed. I'm sure they did for Tony as well. And for both  you could say, while they were not cured, they are healed.
photo not my own
Posted by podso at 9:48 PM